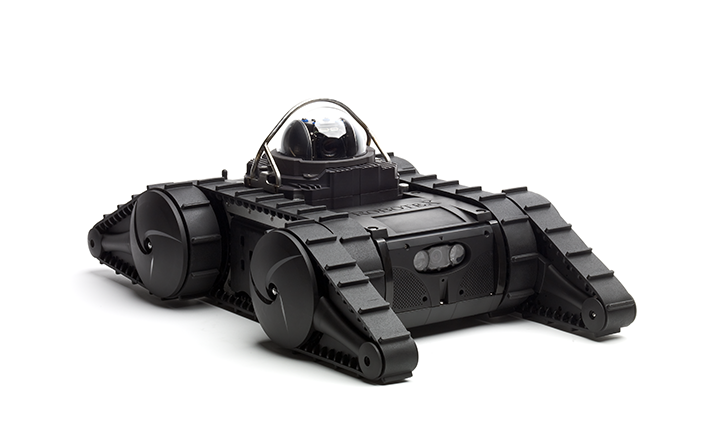 I was brought on to RoboteX’s engineering team to design their next generation robot’s camera, audio, and lighting system. Due to the switch from a completely analog wireless system with multiple channels to a digital system with one channel, the entire system architecture and component selection needed to be revamped. My design of the camera, lighting, and audio PCB enabled the robot to have low cost digital night vision video, a very sensitive microphone, and booming sound. Because of my strong background in mechanical and electrical engineering, my responsibilities transitioned to project management of the complex system.

The RoboteX Avatar II Robot is a modular, remote-controlled robot that features a single board computer and wifi radio link. It was designed to be used by law enforcement and military for situations too dangerous for humans. Its rugged body features waterproofing up to 1 meter depth, the ability to climb stairs, and modular expansion ports for accessories like a pan-tilt-zoom camera and robotic arm.

After the successful release of the Avatar II Robot to production, I transitioned to the project management of the ruggedized controller for the robot. I led the builds of several functional prototypes while coordinating the efforts of internal and external engineering teams.

The RoboteX Avatar II Controller is a wifi controller that features a resistive LCD touch screen, GPS, front and back facing cameras, and ruggedized buttons. Like the RoboteX Avatar II Robot, it was designed to be used in tactical situations. Its magnesium thixomolded housing ensured that it can be carried for long periods of time while still surviving 4 foot drops.